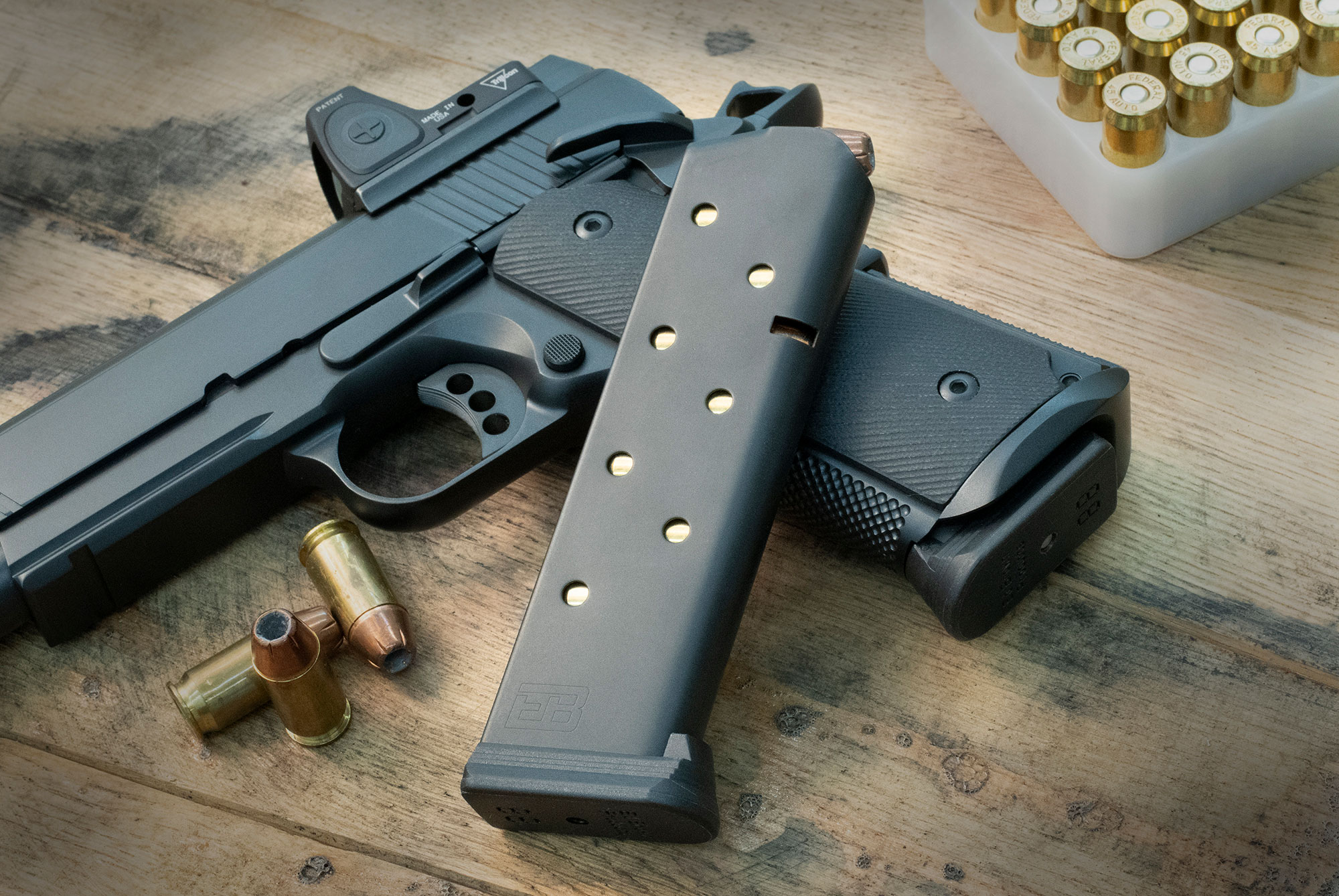 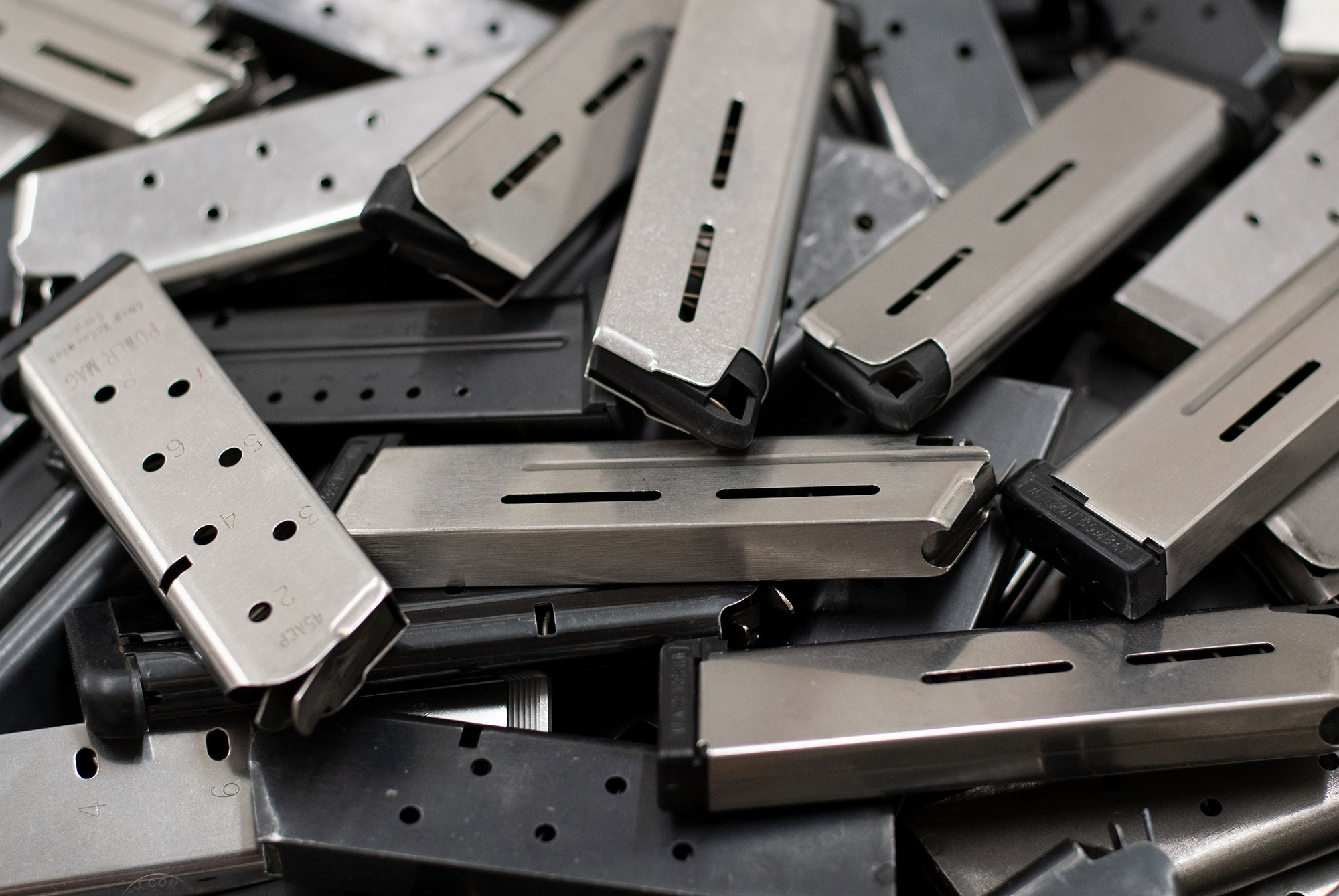 Upgrade your mags for only $10 with our Magazine Exchange Program.

What's up guys Honest Outlaw here and today we're gonna do a quick video on Ed Brown magazines and kind of what makes them special. They're doing an entire line of magazines that you can use in a number of different guns and it's called the Ed Brown Performance line and we've got John May here to talk about what makes them so special.

First off let's talk about the Ed Brown magazine for a little bit. It's got a lifetime warranty on the tube and on the follower springs wear out - that's how it works. The tube is heat treated 410 stainless. It's highly polished inside to smoothen the operation. This is a patented follower. You notice we use the steel follower, it gives you more up pressure on your slide stop so you always get a positive lock. We also use one of the stiffest springs in the industry, that was designed purposely that stiff so that you get positive lock
on your slide stop. The most important function that empty magazine provides is it locks your slide to the rear and ejects out of your gun. Those are the two functions you need it to provide. Agreed. When it's full you need it to feed and it'll do that too. The entire build, the entire design, the entire engineering is about performance - that's the difference in our magazines and everybody else's. There's no short steps taken. Like for example, our 9mm magazine - it's a nine round. The reason it's a nine round is - most reliable with a nine round. Unlike a ten round - it can cause problems with ten round. If you think about 9mm, it's a tapered round so when it stacks up, it starts to flare down. If your nose gets down it dives into the feed ramp problems erupt. Nine rounds we can control the nose. It will feed every time.

Another reason you said that you went with that, is that it would be universally reliable across the bunch of platforms, right? If have a Springfield gun or if you have Colt Kimber or anything like, these magazines are gonna work reliably. Whereas some of the other magazines in the market, we won't mention, don't work reliably.

They tend to feed higher than these which they can crash into the ejector they can cause all kinds of problems with feeding too high and then diving again into the feed ramp. One of the other features that I'm proud of is in everything but the 848, we offer the ability to come flush fit or you have two other base pad choices. You can go a slim fit which is the one on the top or you go full thin on the bottom so you can get the maximum amount of base pad or just enough to work with a magwell.

Which is a lot easier as well, to grab from a pouch or something like that so you can easily index him into your magazine. All these are included for the same price so you're not paying anything extra for all that. All covered by the same lifetime warranty, and don't forget we have a mag exchange program. Iyou have an old magazine you want to try one of our new magazines, you send it in along with the form and for 10 bucks you can have a brand new Ed Brown magazine.

Magazines are not the immortal. Your gun might last you a hundred years but your magazines will not. So if you're running the same magazines for fifty years ago you might want to, at the very least update some springs and things like that, right? And they do require clean and lube as well. They certainly do. Yeah they require maintenance. In particular in a 1911 so if you have a 1911 good mags are super important. Yep. Try them out. Ed Brown Performance Magazines. www.edbrown.com

Having spent over 50 years building custom 1911's, we have tested just about everything possible when it comes to magazine design and performance. You can take full advantage of all of our research, knowledge, and testing with the new Ed Brown line of proven performance magazines. All the components have been engineered and manufactured for maximum performance, and we have combined this with an unbeatable price, selection, and warranty.